The story of the White Lodge Hotel began in 1856 when a private residence, the South Crescent Villa was built. It was a substantial fourteen room property, boasting its own wine cellar, stables, coach house, greenhouse and lawn tennis court. The villa was part of a small group of properties built on South Crescent. The Ravine Hall, in the grounds behind the hotel, has sadly been demolished, leaving Langford Villa, just two doors along from The White Lodge, as the oldest survivor of these graceful villas. It has a fascinating history of its own, with a cast featuring the Sheriff of Nottingham, a classical scholar and Sir Joseph Terry.

However, we return to the South Crescent Villa. In 1868 the villa became the home of the wealthy landowner Charles Mortlock, it is thought that he moved to Filey because his wife Hannah Allott was Yorkshire-born. Charles was part of the family that owned Mortlock J and Sons (Cambridge Bank), Mortlock’s was one of twenty banks that amalgamated to form Barclays Bank.

The South Crescent Villa was substantially rebuilt in 1896 when the celebrated Shakespearean actress Dame ‘Madge’ Kendal purchased the property. Together with her husband William, she became an important theatre manager and the couple spent most of their time in London, using the White Lodge in Filey as a summer retreat. The couple kept South Crescent Villa as their home for some forty years, entertaining society acquaintances from the West End circles in which they moved. Among Madge’s most celebrated friends was Joseph Merrick, the Victorian freak show exhibit who became known as the Elephant Man. When Dame Madge died in 1935, aged 87, the South Crescent Villa was left to an Austrian-born actress friend. 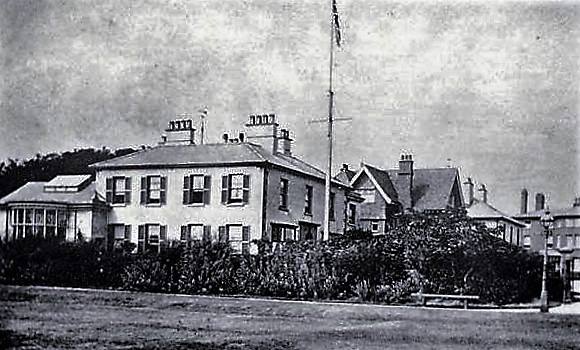 The sale of the villa attracted a lot of interest, with one viewer being Lord Lascelles, the 6th Earl of Harewood. He had been sent to view the property by his wife, Princess Mary (the daughter of King George V) who wanted a residence in Filey as her two sons (George, later the 7th Earl of Harewood and The Honourable Gerald Lascelles) regularly spent their summer holidays at Filey in the 1920s and 1930s.

Lord Lascelles did not follow up his initial interest and the villa was converted into a hotel upon its sale in 1938. It was rebranded as The White Lodge Hotel. Described in publicity as ‘Filey’s new exclusive hotel’, offering ‘sun balconies’ and a ‘country house cuisine’. Sadly, the Second World War brought tragedy to the White Lodge Hotel; in December 1941 the ‘resident director’ of the hotel, Peter Hall, was killed in action aged twenty-eight. He was serving in the Western Desert as a Second Lieutenant with the Royal Artillery and is buried in Cairo’s Heliopolis War Cemetery. Back at Filey, the hotel was requisitioned and used as an officers’ mess.

After the war, efforts were made to re-establish the White Lodge as a ‘small luxury hotel famed for catering and comfort’. In the mid-1950s the hotel was still offering ‘luxury and excellent cuisine’, but moving with the times, the hotel now boasted a ‘television’.