In September 2019 a blue plaque was unveiled on the front of The White Lodge by the then Mayor of Filey, Jacqui Houlden-Banks, whose father incidentally was a former owner of the hotel.

The plaque commemorates the Shakespearean actress Dame Madge Kendall, who along with her actor-manager husband William Hunter Kendal, lived at The White Lodge, then known as South Crescent Villa, as a private residence from 1896 to 1920 (she continued to own the property until 1935). 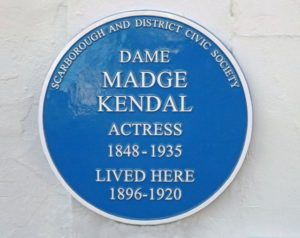 The couple managed St James’ Theatre, London. Dame Madge trod the boards for fifty years in the West End. She was friends with luminaries such as George Bernard Shaw, Bram Stoker, who visited Whitby to research his Dracula novel, and John Merrick, better known the Elephant Man. As a consequence, Dame Madge was featured as a character in Bernard Pomerance’s 1979 play The Elephant Man and in the 1980 film of the same name, where she was portrayed by Anne Bancroft. A painting of Dame Madge hangs on the walls of the National Portrait Gallery in London’s Trafalgar Square.

Dame Madge died, aged 87, in 1935. In her will she left the South Crescent Villa to an Austrian-born actress friend, the property was sold and in 1938 opened as The White Lodge Hotel.